When Everything Feels Like The Movies by Raziel Reid 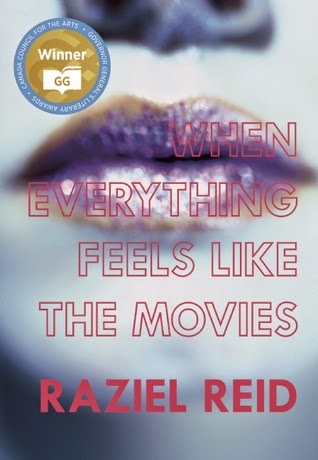 Synopsis:
School is just like a film set: there's The Crew, who make things happen, The Extras who fill the empty desks, and The Movie Stars, whom everyone wants tagged in their Facebook photos. But Jude doesn't fit in. He's not part of The Crew because he isn't about to do anything unless it's court-appointed; he's not an Extra because nothing about him is anonymous; and he's not a Movie Star because even though everyone knows his name like an A-lister, he isn't invited to the cool parties. As the director calls action, Jude is the flamer that lights the set on fire.Before everything turns to ashes from the resulting inferno, Jude drags his best friend Angela off the casting couch and into enough melodrama to incite the paparazzi, all while trying to fend off the haters and win the heart of his favourite co-star Luke Morris. It's a total train wreck!But train wrecks always make the front page.

Review:
After completing this book, in one sitting, I have so much emotion that I don't even know where to start with this review so let's begin with why I chose to read it. When Everything Feels Like The Movies is one of the five finalists for the 2015 Canada Reads title. A book that breaks all barriers is the theme for the competition. I think it's safe to say that this book breaks a lot of them. The book contains shocking and disturbing moments that are counter balanced with occasional humour and beauty. It's an intense read that I could not put down.

Jude is an openly gay youth. This book follows him while he lives his life in a very small town where he is being bullied by his classmates. Despite the abuse that he endures both at school and at home, Jude continues to remain true to himself. He does, however, live on a premise that his life is a movie and the people around him are his supporting cast.

I'd recommend this book to anyone that can keep an open mind about individuality as it really is a wonderful read. This is the second book I've read from the Canada Reads shortlist. I'll provide my final thoughts on which one I'll be rooting for, but I have to say, this one is going to be tough to beat.

Have you read any of the Canada Reads finalists? Which one is your pick to win? Leave a comment and let me know.
Posted by OrieMG at 7:08 PM