The Sound of Music Story by Tom Santopietro 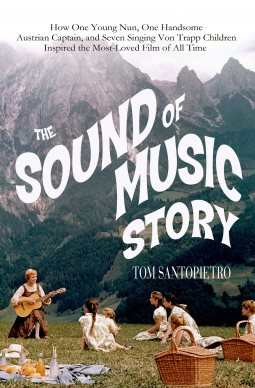 Synopsis:
On March 2, 1965, "The Sound of Music" was released in the United States and the love affair between moviegoers and the classic Rodgers and Hammerstein musical was on. Rarely has a film captured the love and imagination of the moviegoing public in the way that "The Sound of Music" did as it blended history, music, Austrian location filming, heartfelt emotion and the yodeling of Julie Andrews into a monster hit. Now, Tom Santopietro has written the ultimate "Sound of Music" fan book with all the inside dope from behind the scenes stories of the filming in Austria and Hollywood to new interviews with Johannes von Trapp and others. Santopietro looks back at the real life story of Maria von Trapp, goes on to chronicle the sensational success of the Broadway musical, and recounts the story of the near cancellation of the film when  the "Cleopatra" bankrupted 20th Century Fox. We all know that Julie Andrews and Christopher Plummer played Maria and Captain Von Trapp, but who else had been considered? Tom Santopietro knows and will tell all while providing a historian’s critical analysis of the careers of director Robert Wise and screenwriter Ernest Lehman, a look at the critical controversy which greeted the movie, the film’s relationship to the turbulent 1960s and the super stardom which engulfed Julie Andrews. Tom Santopietro's "The Story of 'The Sound of Music'" is book for everyone who cherishes this American classic.

Review:
The Sound of Music was one of my favourite movies growing up. I have fond memories of my mother and I watching the movie together on VHS and created our own intermission with snacks and hot chocolate when it was time to change the tape for Part 2. Throughout the years I've taken every opportunity to watch the various adaptations of the Von Trapp family story including musicals, TV specials and of course updating my VHS tapes to BluRay. With all that said, I was so excited when I was provided the digital ARC for this book.

Let's all start from the very beginning, a very good place to start...

The book begins with a brief history of Maria Kutschera's life before her marriage to Captain von Trapp citing various details taken directly from her written works as well as quotes from the von Trapp children and grandchildren. Following this, the book goes into detail on how the film came to be starting with its roots on stage and the acquisition of the rights to the original German films.

As the film's score is being created we get a glimpse into how the film Cleopatra brings 20th Century Fox to bankruptcy and almost makes cancelling the Sound of Music a reality. We also get a look into how Robert Wise, the film's second director, wrangles up his crucial support team to bring the film to life filling the roles of production designer, film editor, cinematographer and costume designer. With the behind the scenes crew selected and signed on, the book also details the cast selection and who else was considered for the roles of Maria, Captain von Trapp and the seven children.

My favourite aspects of this book are the behind the lens looks at how some of my favourite scenes of the Sound of Music were created and some of the controversies that surrounded them. As I went through the pages, I was visualizing each scene as I remembered them from the film. It was great learning how the scenes were changed and the reasoning behind those edits.

I absolutely adored this book, it's now one of my favourite things. I highly recommend it all Sound of Music fans.

Disclaimer: I received a digital ARC of this book from the publisher in exchange for an honest review.