Struggles of a Dreamer: A Novel by Yahaya Baruwa

In Struggles of a Dreamer: The Battle between a Dream and Tradition, the stories of Tunde, a beggar on the streets of New York City, and Toku'te, the son of a farmer in a faraway land, are woven together in a charming tale full of intriguing characters and adventure. You will encounter the struggles of a dreamer as he faces the challenges of the limiting boundaries of his tradition. You will laugh, cry, experience romance, be frightened, and be held in suspense as you find out how Toku'te manages to remain afloat in a world that requires everyone to fit the same mold.

Review:
Struggles of a dreamer tells a story from the perspective of two characters living in different times and in different lands brought together by the teaching of a single book. Tunde immigrates from his homeland to North America. While trying to live out the American Dream, he falters as a result of poor decisions and bad luck until he comes across an item that soon changes his way of thinking. Toku'te, a young man who grows up in a time much different from Tunde, decides to leave home to pursue his dream. His success stemming from the very same book that changes Tunde's life.

I met the author, Yahaya Baruwa, at my local Chapters book store where he had a table set up to tell passers-by about his book. He greeted me with a warm smile, a friendly handshake and a captivating story about how he followed his dreams to become a writer. His positivity is one of the first things you notice about him and it is very evident in his writing.

Since I've started my blog, I found that I've mostly read up and coming books and new releases. Not really giving myself the time to see what else is out there. I'm glad I got the chance to meet Yahaya and had the honour to read his book. If you're looking for something different, Struggles of a Dreamer is it. The book will leave you inspired and lead you to think about past decisions and maybe even current struggles. It opens readers' minds into thinking in a more positive way. The book has made a difference in my life and if you choose to read it, I hope it does the same for you.

Why Not Me? by Mindy Kaling (Mini Review)


Why Not Me? Is an open and honest collection of essays written by a celebrity that I truly admire, Mindy Kaling. In this book Mindy discusses a variety of personal and hilarious stories that take place from her days as a college student to her current career as the show runner and star of the Mindy Project. Mindy covers topics ranging from gender equality, relationships and rise to celebrity. The theme that really stuck out for me was her wave of self confidence. Her self-esteem and comfort in her own skin is a trait I hope other readers pick up on. It is definitely a characteristic to admire.

Why Not Me? is a fun and quirky book. Mindy Kaling fans will definitely enjoy getting a glimpse into her everyday life and maybe even learn a lesson or two from her wise words. I definitely recommend emptying your schedule before picking up this book because you won't want to put it down.

Disclaimer: I received a finished copy of Why Not Me from Penguin Random House Canada for review. All opinions are my own

Yes, My Accent Is Real: and Some Other Things I Haven't Told You by Kunal Nayyar

In the spirit of Mindy Kaling’s bestseller Is Everyone Hanging Out Without Me?, a collection of humorous, autobiographical essays from Kunal Nayyar, best known as Raj on CBS’s #1 hit comedy The Big Bang Theory.

Of all the charming misfits on television, there’s no doubt Raj from The Big Bang Theory—the sincere yet incurably geeky Indian-American astrophysicist—ranks among the misfittingest. Now, we meet the actor who is every bit as loveable as the character he plays on TV. In this revealing collection of essays written in his irreverent, hilarious, and self-deprecating voice, Kunal Nayyar traces his journey from a little boy in New Delhi who mistakes an awkward first kiss for a sacred commitment, gets nosebleeds chugging Coca-Cola to impress other students, and excels in the sport of badminton, to the confident, successful actor on the set of TV’s most-watched sitcom since Friends.

Going behind the scenes of The Big Bang Theory and into his personal experiences, Kunal introduces readers to the people who helped him grow, such as his James Bond-loving, mustachioed father who taught him the most important lessons in life: Treat a beggar as you would a king. There are two sides to every story. A smile goes a long way. And, when in doubt, use a spreadsheet. Kunal also walks us through his college years in Portland, where he takes his first sips of alcohol and learns to let loose with his French, 6’8” gentle-giant roommate, works his first-ever job for the university’s housekeeping department cleaning toilets for minimum wage, and begins a series of romantic exploits that go just about as well as they would for Raj. (That is, until he meets and marries a former Miss India in an elaborate seven-day event that we get to experience in a chapter titled “My Big Fat Indian Wedding.”)

Full of heart, but never taking itself too seriously, this witty and often inspiring collection of underdog tales follows a young man as he traverses two continents in search of a dream, along the way transcending culture and language (and many, many embarrassing incidents) to somehow miraculously land the role of a lifetime.

Review:
Last month JG and I were getting ready for a short trip to Washington D.C. and instead of planning out my outfits for our lunch with PoTUS (didn't really happen....will likely NEVER happen...) I was more concerned about which book(s) I was going to take with me. Luckily, Kunal Nayyar arrived on my door step (his book, not the man himself) and saved the day. Thank you Catherine! Kunal and I started to get acquainted as soon as we passed airport security. 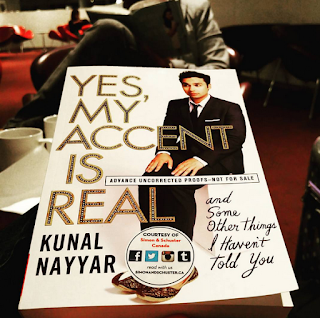 Yes, My Accent is Real is a collection of autobiographical essays and is filled with many (hilarious) reflections of Nayyar's life leading up to his big break. I have to confess, I was once a fan of The Big Bang Theory, but life has gotten in the way of our relationship. Raj, Kunal Nayyar's character on the show was and still is one of my favourite characters. His medical condition, selective mutism, has always been quite intriguing and I'm happy that Nayyar addresses it in his book. We also get a look into Nayyar's privileged upbringing in India, his close relationship with his parents and his struggles to attain his "American Dream".

If you're looking for dirt on your favourite Big Bang Theory character, this book will likely disappoint.Yes, My Accent is Real is, however, a fun and engaging read written by an author that is genuine and intelligent. The book is filled with many moments that will make you laugh out loud. Tip: Do not read this book while watching the safety video on a flight. The look the flight attendant gave me was not so pleasant as I chuckled through the "How to put on your life jacket section".

I thoroughly enjoyed Kunal Nayyar's debut novel and I hope it won't be the last.

Disclaimer: I received an advanced reading copy of Yes, My Accent Is Real: and Some Other Things I Haven't Told You from Simon & Schuster Canada for review. All opinions are my own