I Found You by Lisa Jewell

Happy Book Birthday to I Found You by Lisa Jewell! A thrilling mystery that leads you to cling to every page as you seek out the identity of the mystery man on the beach.

Synopsis from publisher's website:
A young bride, a lonely single mother, and an amnesiac man of dubious origin lie at the heart of New York Times bestselling author Lisa Jewell’s next suspenseful drama that will appeal to fans of Liane Moriarty and Paula Hawkins.

In a windswept British seaside town, single mom Alice Lake finds a man sitting on the beach outside her house. He has no name, no jacket, and no idea how he got there. Against her better judgment, she invites him inside.

Meanwhile, in a suburb of London, twenty-one-year-old Lily Monrose has only been married for three weeks. When her new husband fails to come home from work one night she is left stranded in a new country where she knows no one. Then the police tell her that her husband never existed.

Twenty-three years earlier, Gray and Kirsty are teenagers on a summer holiday with their parents. Their annual trip to the quaint seaside town is passing by uneventfully, until an enigmatic young man starts paying extra attention to Kirsty. Something about him makes Gray uncomfortable—and it’s not just that he’s playing the role of protective older brother.

Two decades of secrets, a missing husband, and a man with no memory are at the heart of this brilliant new novel, filled with the “beautiful writing, believable characters, pacey narrative, and dark secrets” (London Daily Mail) that make Lisa Jewell so beloved by audiences on both sides of the Atlantic.

I Found You is the second book that I have read by Lisa Jewell. Last year, I reviewed The Girls in the Garden. Similar to her previous book, Lisa Jewell, puts an emphasis on her characters and relies on their ability to drive the story. Alice, a single mom, with three children from three different partners lives in a remote town by the sea. Her daily routine is interrupted when she comes across a stranger sitting by the water. The man appears to have forgotten who he is and what it is that has brought him to this quaint town. Alice befriends the man and attempts to help him through his amnesia, potentially putting her and he children at risk.  As the two dig deeper into the man's life, they slowly unravel a secret that has been buried for almost 22 years.

I was a bit hesitant to read I Found You because I had a hard time relating to her previous work. I am glad I put my skepticism aside. I read this book cover to cover on a while on a three hour flight. Despite my flight leaving at 6am, I could not put it down! The characters were well developed and easy to relate to. Lisa Jewell takes you on a journey through two different timelines which eventually meet and unfurl the mystery that surrounds the stranger on the beach.

Fans of mystery/thriller novels will surely enjoy the twists and turns that Lisa Jewell has laid out for her readers. I Found You is a book you'll definitely want to add to your Spring reading list! I'd love to hear from any other readers who have read any of Lisa Jewell's previous novels. Are there any other that you'd recommend? Let me know in the comments!


Disclaimer: I received an advanced copy of I Found You by Lisa Jewell from Simon & Schuster for an honest review. All opinions are my own.

With the Toronto Maple Leafs and other Canadian NHL team's clinching playoff spots this month, hockey fever is definitely in the air! Hockey is one of a few sports that can bring a small town, city and nation together. Beartown by Fredrik Backman is founded on this sense of community.

Synopsis from Simon & Schuster Canada:
The #1 New York Times bestselling author of A Man Called Ove returns with a dazzling, profound novel about a small town with a big dream—and the price required to make it come true.
People say Beartown is finished. A tiny community nestled deep in the forest, it is slowly losing ground to the ever encroaching trees. But down by the lake stands an old ice rink, built generations ago by the working men who founded this town. And in that ice rink is the reason people in Beartown believe tomorrow will be better than today. Their junior ice hockey team is about to compete in the national semi-finals, and they actually have a shot at winning. All the hopes and dreams of this place now rest on the shoulders of a handful of teenage boys.Being responsible for the hopes of an entire town is a heavy burden, and the semi-final match is the catalyst for a violent act that will leave a young girl traumatized and a town in turmoil. Accusations are made and, like ripples on a pond, they travel through all of Beartown, leaving no resident unaffected.Beartown explores the hopes that bring a small community together, the secrets that tear it apart, and the courage it takes for an individual to go against the grain. In this story of a small forest town, Fredrik Backman has found the entire world.

Giveaway time!! The lovely team at Simon & Schuster Canada was gracious enough to sponsor a giveaway on my blog. One lucky winner will receive a finished copy of  Beartown by Fredrik Backman. Complete one or all of the raffle entries below for a chance to win!

a Rafflecopter giveaway
Posted by OrieMG at 12:44 PM 3 comments:

Email ThisBlogThis!Share to TwitterShare to FacebookShare to Pinterest
Labels: Giveaway

The Perfect Stranger by Megan Miranda

Synopsis from the publisher:

In the masterful follow-up to the runaway hit All the Missing Girls—a “fiendishly plotted thriller” (Publishers Weekly)—a journalist sets out to find a missing friend, a friend who may never have existed at all.

Confronted by a restraining order and the threat of a lawsuit, failed journalist Leah Stevens needs to get out of Boston when she runs into an old friend, Emmy Grey, who has just left a troubled relationship. Emmy proposes they move to rural Pennsylvania, where Leah can get a teaching position and both women can start again. But their new start is threatened when a woman with an eerie resemblance to Leah is assaulted by the lake, and Emmy disappears days later.

Determined to find Emmy, Leah cooperates with Kyle Donovan, a handsome young police officer on the case. As they investigate her friend’s life for clues, Leah begins to wonder: did she ever really know Emmy at all? With no friends, family, or a digital footprint, the police begin to suspect that there is no Emmy Grey. Soon Leah’s credibility is at stake, and she is forced to revisit her past: the article that ruined her career. To save herself, Leah must uncover the truth about Emmy Grey—and along the way, confront her old demons, find out who she can really trust, and clear her own name.

Everyone in this rural Pennsylvanian town has something to hide—including Leah herself. How do you uncover the truth when you are busy hiding your own?

The story jumps right into Leah's background prefacing her reason for moving from New York to a rural Pennsylvania town. You get an immediate sense that even though Leah is hiding a dark secret, she is a strong willed woman who will not back down from a fight. Her character is tested throughout the novel, but her loyalty and perseverance to find the truth behind her friend's disappearance never falters. The author takes readers down winding roads as you learn about Leah's past and the source of her passion towards finding the truth behind Emmy's disappearance. Miranda does a fabulous job with developing this character which is a huge reason for why The Perfect Stranger is so engaging.

It has been a while since I've read a book from cover to cover without coming up for air. The Perfect Stranger has a perfect blend of mystery, twists and dash of predictability (I have to be right sometimes!). 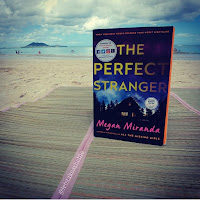 This is the first novel I've read by Megan Miranda and surely won't be my last. With the warmer weather on its way, The Perfect Stranger is the perfect book to take to the beach and get lost in the twisted and engrossing story that the author has laid out.

If you're still unsure about picking up The Perfect Stranger, you can check out an excerpt here.


Disclaimer: I received an advanced copy of The Perfect Stranger by Megan Miranda from Simon & Schuster for an honest review. All opinions are my own.

Posted by OrieMG at 7:26 AM No comments: