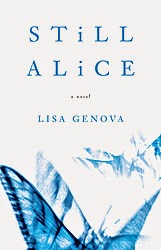 Synopsis:
Alice Howland is proud of the life she worked so hard to build. At fifty years old, she’s a cognitive psychology professor at Harvard and a world-renowned expert in linguistics with a successful husband and three grown children. When she becomes increasingly disoriented and forgetful, a tragic diagnosis changes her life--and her relationship with her family and the world--forever.

At once beautiful and terrifying, Still Alice is a moving and vivid depiction of life with early-onset Alzheimer’s disease that is as compelling as A Beautiful Mind and as unforgettable as Judith Guest's Ordinary People.

Review:
Where do I even begin with this...

Lisa Genova created a strong and intelligent female lead character in Alice Howland. An intellectual equal to her husband. She is an accomplished author, leader in her field and a distinguished member of Harvard's esteemed faculty. The book spans two years September 2003 - September 2005. During this time we learn about Alice's daily life before Alzheimers, her struggles after her diagnosis and we painstakingly follow her as her mental state deteriorates with each page.

Still Alice was a captivating read about an illness that so many, too many, people have to live with.  It brings forward the pains, devastation and destruction that Alzheimers disease bestows upon its victims and their loved ones. I adored this book and hope that a cure for Alzheimers will be discovered one day soon.

I've been holding off on seeing the Still Alice film until after I read this book.With Julienne Moore's recent Oscar win for her portrayal of Alice Howland, the following quote did make me smile:

"She beheld her giant, heavy cone as if were an Oscar, paid with a five-dollar bill, dropped the change in the Tips for College jar, and continued on toward the Charles River." (p115)

Lisa Genova was one bang on with that line!

This was the first book I've read that was written by Lisa Genova and it's instantly made me a fan of her work. The copy of Still Alice that I purchased has an excerpt from her next book Inside the O'Briens. I've already pre-ordered it and await it's arrival on April 7.
Posted by OrieMG at 9:12 PM