The Silver Witch by Paula Brackston 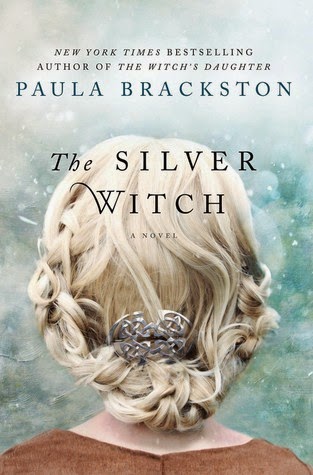 Review:
I won an Advance Reading Copy (ARC) of The Silver Witch from St Martin's Press.

This book is written from the perspective of two women: Tilda Fordwells, a ceramic artist and Seren Arianaidd, an ancient witch and shaman. Tilda and Seren are complete strangers living in different times their only connections being the lake and their similar appearance. Both women are described to have silver hair and pale skin.

Tilda Fordwells, retreats to the cottage that she and Mat, her late husband, purchased as their 'forever' home. It has been a year since Mat's death and she hopes that the peaceful surroundings of the cottage will help ease her pain and anguish. However, since arriving at the cottage, Tilda has begun to notice changes within herself. She has a growing sense of power, specifically electricity around her, and has begun to have visions of ancient people across the lake. These new found powers, a new love and a lurking danger lead Tilda to research the history of the lake's former inhabitants. In Seren's time, she is described to be a well respected advisor to the Prince Brynach. Seren has a vision that the crannog will be under attack from someone close to the Prince endangering him and his people. Both women will need each other in order to overcome the obstacles presented to them in their own time.

This book started off slow, there was a lot of history that needed to be told and character building that needed to be done. But, that quickly changed once Tilda started having her visions. I was hooked and to be honest a bit spooked! (You'll know the part when you read it...)

This is the first book that I've read by Paula Brackston and it's intrigued me to pick up another. This was intelligently written, especially the parts that took place in the ancient world. It was very obvious that the Brackston has done a lot of research on Celtic history as her descriptions of her characters and settings were so detailed. One wish that I have for this book would have been to see images of Tilda's ceramics, they were described so beautifully. I highly recommend The Silver Witch, it was a fun and enjoyable read, one that I can see myself reading again and again.