The Inconvenient Indian: A Curious Account of Native People in North America by Thomas King 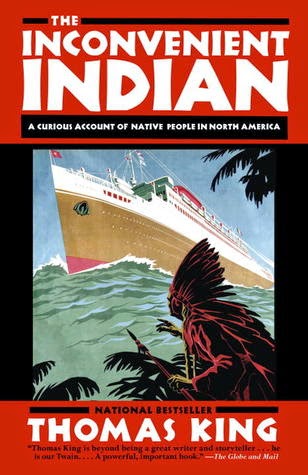 Synopsis
The Inconvenient Indian is at once a “history” and the complete subversion of a history—in short, a critical and personal meditation that the remarkable Thomas King has conducted over the past 50 years about what it means to be “Indian” in North America.

Rich with dark and light, pain and magic, this book distills the insights gleaned from that meditation, weaving the curiously circular tale of the relationship between non-Natives and Natives in the centuries since the two first encountered each other. In the process, King refashions old stories about historical events and figures, takes a sideways look at film and pop culture, relates his own complex experiences with activism, and articulates a deep and revolutionary understanding of the cumulative effects of ever-shifting laws and treaties on Native peoples and lands.

This is a book both timeless and timely, burnished with anger but tempered by wit, and ultimately a hard-won offering of hope -- a sometimes inconvenient, but nonetheless indispensable account for all of us, Indian and non-Indian alike, seeking to understand how we might tell a new story for the future.

Review
After three attempts to sit down and read this book, I finally made it to the end.  Now, I don't think I can write a review that will do it justice. Last night, I attended a Google Hangout that had all five of the Canada Reads finalists answer questions derived from Twitter. Knowing that I had to write this review, I listened carefully to Thomas King's responses to see if I could find anything that could help me. He mentioned that he tells his students that when writing, you need to re-write, re-write and re-rewrite and that's exactly what I did here...

The Inconvenient Indian draws out many misconceptions about Natives and their history. The facts, ideas and history presented by Thomas King are informative and eyeopening. He takes a humorous approach to this book and I'm glad he does, otherwise it would be fairly depressing. King also mentions in the prologue that although this book contains historical facts, the narrative has been derived from his conversations with others along with his own beliefs. I also appreciated King's writing style. It feels like he is telling a story versus lecturing from a history book. It made it much more enticing and enjoyable.

I strongly believe this is a book that every Canadian and American, for that matter, should read. Readers will be able to relate to King's writing style and will appreciate  his straight to the point demeanour.

I have officially read all five of the 2015 Canada Reads finalist books. I'm so happy that I challenged myself to get through them all before the debates. All five were wonderful books in their own way. Earlier I mentioned that I attended a Google Hangout featuring all five of the Canada Reads finalists, you can watch the entire segment here. All of the authors are quite hilarious. I will be writing a summary piece to highlight my pick(s) for the winning book next week. Keep an eye out for it!