I remember seeing the tweet below posted by Penguin Canada in my Twitter feed and it definitely peaked my interest.

Looks like one of the biggest books of next year might be showing up in some mailboxes soon... #THEWIDOW pic.twitter.com/DiS2eewBUY
— Penguin Books Canada (@PenguinCanada) November 25, 2015 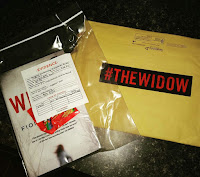 A few days later, I ended up being one of the lucky of the recipients of the mysterious package. Inside was an advanced copy of The Widow and a pack of Skittles contained in an evidence bag.

As soon as I cracked the spine, I could not put it down.

The Widow is a fictional story told from three points of view: The Widow, The Reporter and The Detective. The story flips back and forth through a timeline that spans four years. The story contained within the pages is twisted and thrilling mystery. It leaves you to question what people are willing to do to maintain their image in the public eye.

Jean, the poor widow who is left in the wake of her husband's death, unravels before our eyes. At first, she appears to be a frail and emotionally battered housewife. But, after Glen, her husband, is gone, we watch as she slowly evolves into a new person - one that is a complete mirror image of her former self. The question one needs to ask is, "Has she been this person all long?".


"It looks like someone else. Some other woman who's lt herself be taken away by strangers. Strangers who, until today, were probably banging on my door and writing lies about me. I rub my face and so does the woman in the window. Because it is me." -p.86

I enjoyed The Widow and rate it very highly on the "unputdownable" scale. The story's twists and turns will take you on a thrilling ride.I would definitely recommend it to readers who enjoyed The Girl on the Train by Paula Hawkins. I also believe those who binged watched Making a Murderer on Netflix will like it as well.

Disclaimer: I received an advanced copy of The Widow from Penguin Random House of Canada. All opinions are my own.