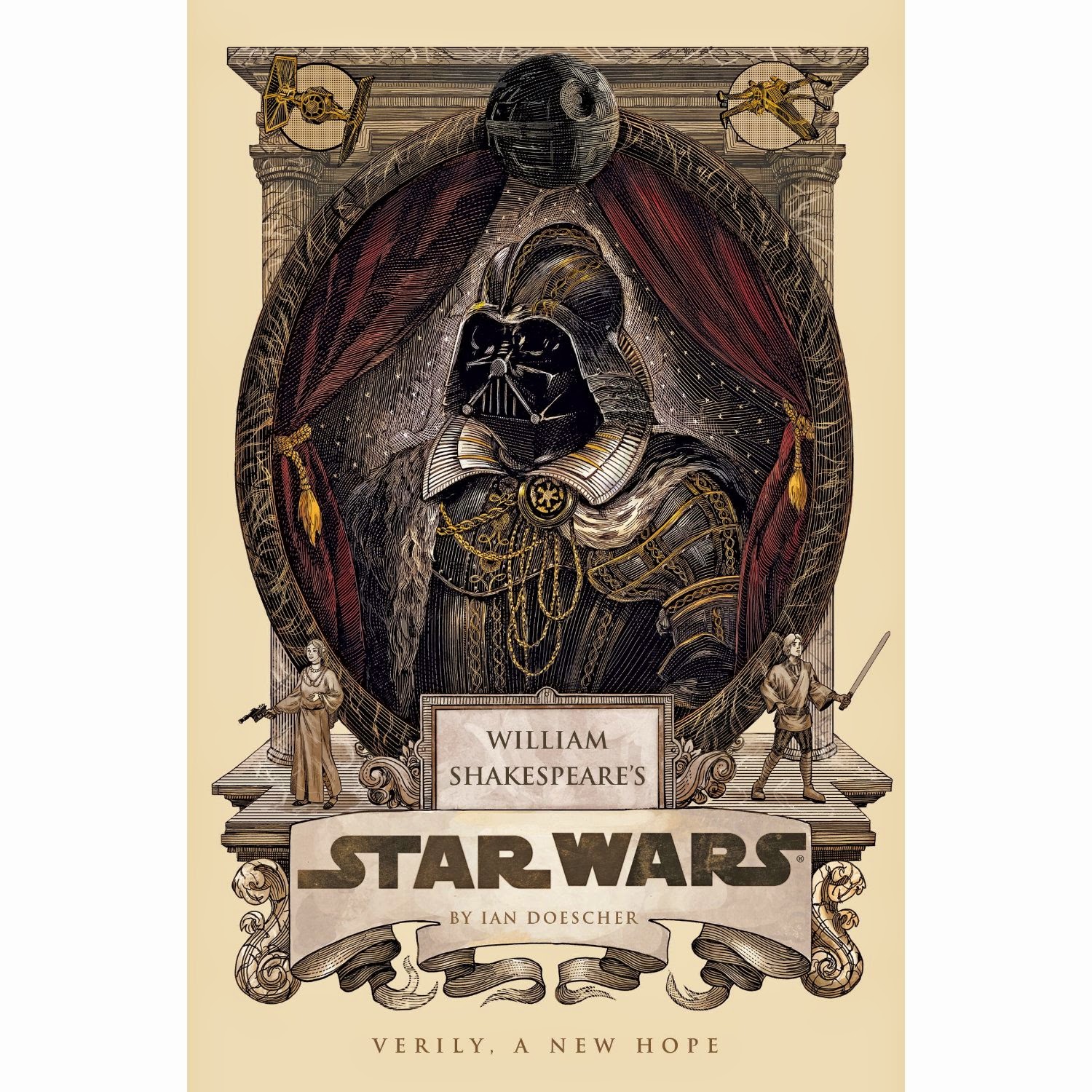 Synopsis:
Return once more to a galaxy far, far away with this sublime retelling of George Lucas’s epic Star Wars in the style of the immortal Bard of Avon. The saga of a wise (Jedi) knight and an evil (Sith) lord, of a beautiful princess held captive and a young hero coming of age, Star Wars abounds with all the valor and villainy of Shakespeare’s greatest plays. ’Tis a tale told by fretful droids, full of faithful Wookiees and fearstome Stormtroopers, signifying...pretty much everything.

Reimagined in glorious iambic pentameter—and complete with twenty gorgeous Elizabethan illustrations--William Shakespeare’s Star Wars will astound and edify Rebels and Imperials alike. Zounds! This is the book you’re looking for.

Review:
You all knew it was coming. There was no way I was going to do a reading challenge without including something Star Wars related. In my search I came across Ian Doescher's William Shakespear's Star Wars trilogy. It's the Star Wars saga episodes IV to VI, completely re-written in iambic pentameter. To read and fully appreciate this stroke of genius you need to have a good understanding of the movie, Star Wars: A New Hope, and an appreciation of Shakespeare (even a little is enough). The book itself is an easy read and for those, like myself, who know the movies well, you'll be able to visualize the scenes as you go through the pages of this book. Most readers will know the story, (if you didn't I'm not really sure why you'd decide to pick it up) so there's no point reviewing each aspect of the plot. I'd much rather share the various components of this book that made me love it as much as I love Ewoks (On a scale of 1 to 10, Ewoks sit at a 9.5).
First, the asides. Various characters are given an opportunity to express their inner thoughts, something that we don't necessarily hear when watching the movie. We simply just assume what they're thinking based on their actions. R2-D2's asides are particularly hilarious given that he does not speak in the movies. I also thought it was genius that his beeping went along with the rhythm of iambic pentameter.

I also quite enjoyed the various drawings that were scattered throughout the book. Nicholas Delort was credited for these images according to the author's acknowledgements. They were drawn in Elizabethan style. My favourite image was of Luke holding a Stormtrooper helmet in the same vain as Hamlet holding Yorick's skull.

Lastly, the translation of some of the movie lines into Shakespearean prose were both hilarious and foreshadowing. Here are a couple of my favourite quotes.

Luke storms out of the room when he's told by his Uncle Owen that he is forbidden from going to the Academy. Beru, Owen's wife attempts to calm him by saying:

"But Owen, he hath not a farmer's heart -
This apple falls quite near his father's tree." (1.7.86-87)
Indicating that Luke is much like his father.

In the infamous scene where Han and Greedo are at a stand off in the Mos Eisley cantina, the original Star Wars movie shows Han shooting first. However, in the remastering, editors added in a second shot coming from Greedo completely missing Han despite being at point blank range. The author adds a bit of humour to this controversy by adding the following aside with Han saying:
"And whether I shot first, I'll ne'er confess!" (3.1.162)

I thoroughly enjoyed this book. It's a 5 out of 5 for me. Ian Doescher executed this story flawlessly. I can't wait to dig into The Empire Striketh Back. The books are available on Amazon.ca or on Indigo.ca. I would recommend picking up the Royal Imperial Box set which includes all three books in the trilogy and a pretty cool poster. If anything do it for the poster! :)

Go ye then, and Force be with you all!